Parnian is a passionate and active musician from Iran.  She began learning the viola at age 11 studying at the Tehran Music Conservatory.  She holds a Bachelor of Music from Tehran University of Art, where she graduated in 2018.  Parnian is a violist who has vast performance experience all over venues in Iran.  In addition to being an active chamber musician, she has worked with some of the professional Iranian orchestras and as a regular player at the Tehran Philharmonic Orchestra and the Iran National Orchestra.  As a music teacher, she has experience with the suzuki method teaching violin lessons and Viola Lessons.  She won 2nd prize at the Iran Youth Music competition in 2016.  Also, she has had the opportunity to perform in masterclasses or work with great artists such as Michael Van Der Sloot, Damiano Jurano, Luca Sanzo, Simone Lutti, W. Christian Shulz, Setareh Beheshti, Sohrab Kashef and Arash Gouran.
Parnian moved to Canada in the summer of 2019 to pursue a Master's degree in Performance under Professor Sharon Wei and Dr. Caitlin Boyle at Western University.  She was honored to be a recipient of the Gordon Jeffrey Strings and Chamber Music Graduate Award during her time there.

Jesse started playing the violin at the age of 3 and has been fiddling around ever since.  Brought up as a student of the Suzuki violin method, Jesse quickly developed a love for playing all genres of music from classical to country and jazz to rock.  His performances have taken him across Canada and the U.S., appearing both as a soloist and alongside artists such as Ben Vereen, Jann Arden, Ben Harper, Michael Learned and Barrage.  He is currently an active member of the Stacey Kay band with whom he appeared on season 10 of America's Got Talent.  Jesse is also an accomplished teacher and conductor, having maintained a private studio and been a faculty member at the Forest City String School since 2008.  Jesse also works as a performer, arranger, producer and musical director in the world of musical theatre.  He is a recurring cast member at the Victoria Playhouse Petrolia and has worked for other top Canadian theatre companies including Drayton Entertainment, The Grand Theatre, Rainbow Stage, and The Stratford Festival.  Jesse co-wrote, music directed and starred in his solo show Fiddler On The Loose and is also the arranger and musical director for the new hit Canadian musicals Strike!: The Musical, and No Change In The Weather.  Jesse plays Glasser bows and carbon fibre violins as well as a Wood Violins 5-string Viper.  Jesse teaches violin lessons and Viola Lessons. 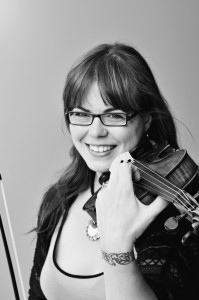 Chantal Lemire is a PhD candidate at Western University.  She received a Master of Music in viola performance from McGill University, and a Master of Arts in Music Theory from the University of British Columbia.  As a violist and violinist, Chantal has performed in chamber ensembles across North America and Europe and with orchestras such as the National Youth Orchestra of Canada, the Prince George Symphony Orchestra, and the Winnipeg Symphony.  She was assistant principal of the National Youth Orchestra of Canada in 2010, and concertmaster for the Prince George Symphony's 2013 production of Les Miserables.  Chantal has taught violin and viola at L'École Formation Artistique au Coeur de l'education (FACE) school in Montreal, and is currently a faculty member for the Orchestra North Summer Program in Owen Sound, ON., where she teaches violin, viola, and music theory.  Her doctoral research focuses on intersections of speech and music, exploring how elements of speech can be used as compositional material in both popular and art musics.  As a scholar, Chantal has presented papers at the Canadian Music Centre, The Peabody Institute of Music, the Vancouver International Song Institute, as well as at several graduate student conferences across Canada.  In 2013, she was awarded a Canada Graduate Scholarship from the Social Sciences and Humanities Research Council (SSHRC) for her doctoral project on text/music interactions in singer-songwriter Tom Waits's spoken-word songs, and in 2015 she was awarded a Doctoral Excellence in Research prize from the University of Western Ontario.  At SMArts, she teaches violin lessons, Viola Lessons and theory lessons. 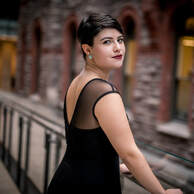 Camila is a Brazilian mezzo-soprano who started her musical studies when she was 6 years old.  Her first instrument was the violin which she played for 16 years all the way through the University of Sao Paolo, graduating in 2017 with a Bachelor in Violin Performance.  Her experience as an instrumentalist includes years performing as a 1st violinist in The Experimental Orchestra of Repertoire, playing classical and popular music in duos, trios and quartets, as well as 10 years of experience teaching violin lessons.
In 2018 Camila moved to Canada with the goal of further improving her craft as a musician, now focused on operatic studies.  Some of her teachers include Neil Semer, vocal coach Peter Tiefenbach, and currently she is completing the second year of her MMus at Western University under the tutelage of Patricia Green.  During this time in Canada, Camila has won the 1st prize at Maritsa Brookes Concerto Competition, 1st place at the Graduate category of NATS, and had her opera debut as Katisha (The Mikado) at Western Opera.  Future productions include La Zia Principessa (Suor Angelica) and performing as a soloist in Mahler's Lieder Eines Fahrenden Gesellen with the Western University Symphony Orchestra.  She also now joins SMArts teaching violin and Voice Lessons.

What Are Your Rates?

We've learned that every music teacher is different, and each has different skills.  Some have Masters degrees, while others are still students themselves.  For this reason, we've given the teachers the ability to set their own rates when they are hired based on their skills.  The rate for violin lessons start at $23.00 for a 30 minute lesson.

For beginners the answer is definitely yes.  When you are first learning, you're getting a lot of new, and in some cases, confusing information given to you.  The amount of information given in one 30 minute lesson will give you a lot to work on as you practice throughout the week.  Practicing is absolutely essential to learning music.  As you get to more advanced skills, more time may be necessary if and when your teacher recommends it.

How Long Will It Take To Learn?

We get asked this question a lot.  There is no specific date, or number of lessons.  It depends on a few things including how often students practice.  Although the songs may be very simple, we know we can have students playing at least one short song within 30 days.  If you are hoping to play Mozart, it will take more time.  But anyone can do it if they want it enough or work hard enough.

What Else Do I Need To Play?

There are additional supplies that may be needed throughout the course of your study, such as strings, tuners and shoulder rests.  Also, as you progress, you will need new, more advanced method books so that you can continue to learn new songs and new techniques.  We stock the basics to make sure every student has what they need to play, but other items can be specially ordered for you if needed or desired.  For more information on product availability, please ask our administrative staff.